Being from the western 'burbs, I’m always conflicted about the events that come onto my radar that are hosted in downtown Chicago. Are you?

Notes from my first Chicago HubSpot User Group Meetup & thoughts about events in Chicago for folks in the western suburbs:

I live in the western suburbs of Chicago. I work in the suburbs that are even further west. I used to work in downtown Chicago, near the loop. As a result of these three things, I’m always conflicted about the events that come onto my radar that are hosted in downtown Chicago.

On one hand, I’m super excited about all the fantastic opportunities for networking and learning that exist downtown as a direct result of the density of a modern, urban, metropolitan marketplace.

On the other hand, because I don’t work in the downtown Chicago area anymore, getting to those events – especially the smaller, one night meetups and workshops – always feels like a field trip that takes a bit more time out of my day than I’m sure the organizers initially intend.

For some events, like my first Chicago HubSpot User Group (#ChiHUG) meetup, the extra time is totally worth it. For others, it always seems like there is extra pressure to “get something more” out of the event that stacks the deck unfairly against the folks in charge of putting it on. 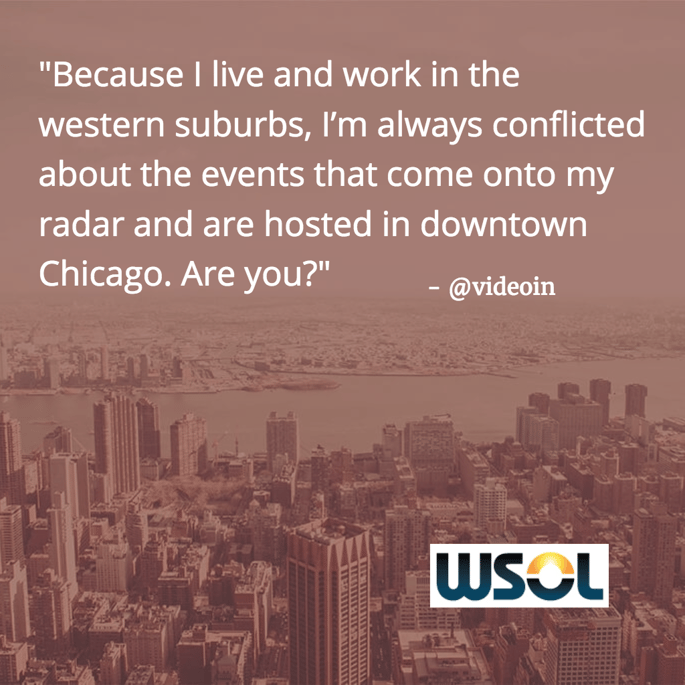 That feeling of “extra investment” in terms of transit time also factors into my choices for which events I’ll go to, which groups I’ll be active in, and what I have the bandwidth to do.

I know there are other folks who live and work in the western suburbs of Chicago who have to feel the same way. Are you one of them? If you do, let’s connect and talk about putting something together out this way – about HubSpot or content marketing in general.

In the meantime, if you didn’t get to go to the last HUG meeting (my first ever) here are some highlights from my notes. You should also register for the next meetup, in July (link at the bottom).

From the HUG presentation:

The first worthwhile tip for this meetup’s topic around “going beyond the e-book” is to mix out your assets. There are so many options for content these days. Make good strategic use of each of them, and make sure the item matches the objective.

Some great examples of types of content that can support an e-book or serve as an alternative were suggested by the group at large:

One good example of using a number of elements together in support of each other as part of a larger campaign (targeted at segmented PERSONAS, of course) was the phone interview guide templates @Hireology produced via editable PDFs as “interactive guides,” which they supported with blogposts, webinars, and a SlideShare.

There’s more about that and the other suggestions in the slide deck that the organizers provided to all folks who registered. I’m sure they’d be happy to send that out to anybody who was interested.

Another highlight that stuck out to me was @urbanbound’s use of Google Presentations to create much of their content. I thought that was a unique tip and worthy of further exploration. Apparently, it allows them to have more control over design consistency for team generated content, but it also facilitates collaboration really well.

One additional concept that came out of the meeting that I felt is useful in many contexts is the ability to have a few smaller, more digestible content pieces centered around single aspects of a product or service rather than exhaustive compendiums. The “demo this feature” idea allows users to get a sense of individual product attributes without feeling like they need to dive full-in on larger product overviews or accept an inflated time commitment. As long as you’re tracking that consumption, it’s a great way to nurture folks into a deeper relationship too.

There was some great conversation about email signatures at the end of the meeting, and one company in particular (Sigstr) was called out as super-useful. The notion of being able to have centralized control over the email signatures of multiple individuals in order to coordinate messaging according to campaign and get data about engagement is a very appealing one.

One thing I realized at that point, however, is that many organizations might not need to pay for a separate SaaS platform to have dashboard control over the email signatures of many individuals, since many project management platforms have a similar functionality baked-in. I know ours does. I’ve rarely seen them used that way, however. Have you?

Those are my notes from my first ChiHUG. I can guarantee I’ll be back, despite the haul to downtown, but if you’re interested in doing something in the western suburbs, please reach out in the comments or over social media. In the interim, make sure to RSVP for the next Chicago HUG and let me know you’ll be there too!

The HubSpot Developer Extension for Chrome/Chromium adds useful shortcuts to commonly used HubSpot Query Parameters, and tools for making HubSpot Development easier and more enjoyable. In this post, we'll breakdown the plugin and its features.

Are you marketing to Millennials, Generation Xers, Baby Boomers, or Traditionalists? Each generation requires a thoughtful approach to marketing tactics since each has different values and characteristics. Our collection of infographics look at the ways marketers can best reach members of different generations.