Hosting a web-powered seminar or webinar used to be quite the complicated task, but these days, there are fewer issues. What might that mean for the future of the webinar?

Hosting a web-powered seminar or webinar used to be quite the complicated task, requiring technical expertise at highly specialized levels in computing and video and large, powerful custom software solutions. Live streaming any kind of video signal over the internet presented so many challenges, both on the part of the host and on the part of the attendee, that many organizations simply couldn’t bother, or paid a pretty penny to participate. These days, however, bandwidth is less of an issue for both the host and the attendee, and streaming video content of all types, webinar or otherwise, seems to have really hit its stride. What might that mean for the future of the online seminar? 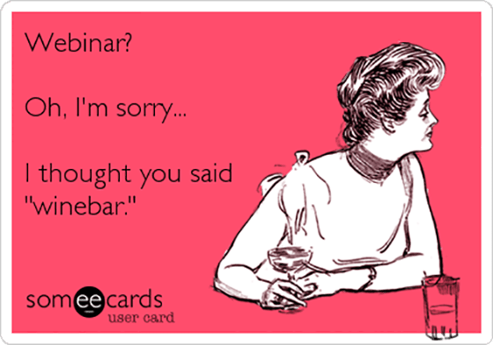 There certainly are plenty of platforms out there offering webinar tools. GoToMeeting, JoinMe, WebEx, Zoom, and even one of the earliest of live video streaming services, Google Hangouts Live (also known as YouTube live broadcast) have all reached a decent stage of maturity and offer great suites of features and benefits for any organization interested in creating a webinar.

Even if you’ve never hosted a webinar (if you'd like to take a look at what one looks like, we have a few of our own that you are welcome to check out), there are enough platforms offering options for hosting that even the least technical among us can get one accomplished. Yet just the word “webinar” does not necessarily inspire excitement. Even though hosting webinars has become easier, the basic structure hasn’t changed much. There are some efforts that have been made, however, to take these online learning sessions and change them up a bit.

For example, one of my favorite uses of Google Hangouts Live, CMGRhangout, has taken the web seminar in a positive direction, in my opinion, by steering clear of the standard “powerpoint deck with disembodied voice” and adding the bright, shining faces of subject matter experts on a virtual video panel. In many ways, Google Hangouts is the original webinar disruptor, and with screen sharing and mobile participation options easily at hand, it still ranks pretty high on my list of go-to tools for webinars (aside from the obvious GoToWebinar).

Of the biggest necessities for a successful live streaming video seminar, community is first on my mind. After all, the content you are creating is meant to add value to a community, right? That’s what brings them to you. Well, what if, instead of bringing your community to your live streamed web seminar, you could bring your webinar to your community? It’s a fine line, I know, but a difference worth exploring. After all, with so many active users, odds are the folks in the community you want to serve probably have Facebook accounts, right? That means better tracking and no software downloads. This puts Facebook in a good spot to do a little webinar disrupting themselves.

Take the recent advent of live video on Facebook, for example. You probably saw the commercials for the tool during recent New Year's TV broadcasts. Suddenly, Facebook is a great way to use dynamic, interactive, live video content to add value to your communities. Got answers to the questions your communities crave? Go live with your very own subject matter experts in frame, and you’ve got yourself a Facebook Live powered webinar. Even Instagram now allows for live streaming in the same way.

Maybe you already have a close-knit community established on Facebook, and you've decided to merge that community into a Facebook Messenger Group. You can now host a video chat with up to six screens and up to fifty (that’s right, 50!) participants, all from different devices. 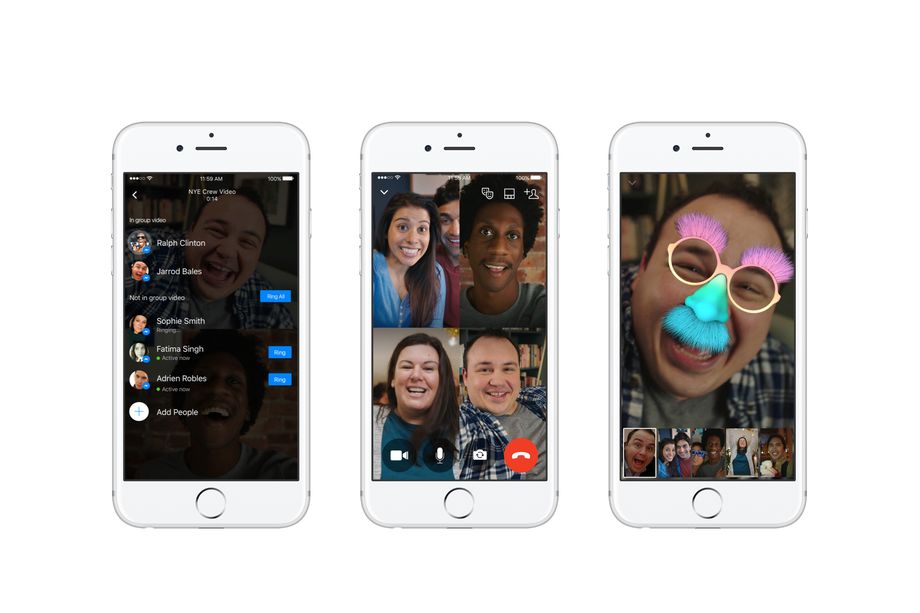 The traditional configuration of a webinar with a slide deck and a presenter and attendees who register ahead and often must download special software to participate could take place right inside Facebook or (if you have fewer than 50 attendees) Facebook Messenger. Granted, at this point, you won’t be doing any screen sharing without some hacking, and recording isn’t yet a feature of video chats on Messenger (though it is for Facebook Live itself). But maybe that might be the disruption webinars need, in particular if your experience with the return on investment has been low.

With Facebook offering options that both look like Google Hangouts (six head video chat) and Periscope (first person shooter stream), it isn’t surprising that Twitter made an extra effort to get live streaming video going directly from their primary app, without the need for Periscope.

You can now take your subject matter expert live directly to your more public facing Twitter audience without having to worry about who is or isn’t already a part of your digital community. You still need to get the right content in front of the right eyeballs on Twitter, however, so I expect to see more tools for organizations to promote those live sessions with subject matter experts soon. Either way, the disruption of your garden variety webinar is likely to continue to involve Twitter in the near future, whether by video stream hosting or simply by hashtag interaction.

Of course, Twitter hasn’t yet fully abandoned their original live video streaming acquisition, Periscope, just yet (though my predictions for 2017 hint that it may not be far off). Without Periscope and its tempest-in-a-teacup rivalry with early live video streaming darling Meerkat, Facebook Live would not be a thing. As a result, the tool remains yet another option for webinar disruption and bringing your webinar to community, if you have one there or on Twitter, or even on Meerkat for that matter. Perhaps of greatest note at the present moment is Twitter’s choice to use Periscope to attempt to beat Facebook to the punch in live broadcast 360 video.

What that wouldn’t do for a web seminar, eh? Being able to pan around a 3D video presentation would make for an engaging experience. Virtual reality tickets to your next panel discussion, anyone? That may be closer than you think, too, given Facebook’s stated interest in VR and AR.

For all of the wow factor of those tools and their potential for disrupting the webinar, it’s important not to lose sight of the purpose of a webinar. Webinars work best when they add value to a community through teaching and learning, and when they provide interactivity.

When it comes to business communications and interactivity these days, there is no more lauded disruptor than SLACK. It should be of no surprise, then, that the business networking community startup is getting into the video conferencing game.

You can now host video calls with up to 15 people simultaneously inside a SLACK community. Couple that with the ability to have a “public private” SLACK (which we talked a bit about recently) that anyone in your community can join, and you can see how it might be possible to host a micro-webinar with 15 community members. It’s also possible to take your community of subject matter experts and record a video chat between them like a panel discussion using a screen recording app like ScreenFlow.

It isn't hard to see how the Mircrosoft-owned Skype (especially with Microsoft tool integrations) and SLACK are now set up to be competing for those internal video chat conversations, but add the ability to record and distribute, and you've got a powerful tool for getting subject matter experts on video for your communities.

With video taking such a driving role in the way that modern digital ecosystems are evolving, it's hard to imagine this possibility for disruption diminishing. What's the next platform feature to disrupt webinars going to look like? Snapchat also has a video feature, which, with some tweaking, is easy to imagine as a way to get subject matter experts on video for your community. Have you hosted a webinar recently? Have you thought about ways to spice up your webinars, or are you looking for a way to add more video to your content marketing strategy? Perhaps by getting subject matter experts in front of a camera to add value to the communities your content serves? Let us know in the comments below or on Twitter.

If you're interested in more discussion on this topic, take a look at a recent webinar we put together on Blogging ROI, where we talk with some subject matter experts about how content like webinars are ripe for disruption and how measuring return on investment needs to change along with advances in content.