1:20pm. It was 1:20pm on a sunny October afternoon when Lila turned her attention away from the auburn leaves drifting off the branches of the oak tree outside of her window. She turned her focus back toward her screen. Her gaze shifted over to her mug of coffee, lukewarm and half full. Then back to her screen.

“Ugggghhh,” she sighed. “Content entry.” Running out of distractions, she logged into the CMS. An Excel document was also open on her desktop. It contained a list of all the URLs that existed on their company’s website. Beside each link there was a column with a name, a status, and some additional notes. There were at least 250 rows with the name Lila assigned. All the text and images on each of those pages needed to be copied from the old site and pasted into the new. It was a tedious process, and it felt mind-numbing to Lila, who still had a laundry list of pressing marketing matters to attend to before the day’s end.

4:15pm. It was late in the afternoon, and Lila was starting to get the hang of the new CMS. On their current website, all the layouts were the same: a simple 3 column layout with main content in the center, navigation on the left, and related content on the right. The tricky thing was that the new website had a lot more options for layout and for text formatting. The content didn’t map over apples to apples. Now that she had gotten the hang of how to format the content, she was actually beginning to enjoy the process of setting up pages. She had even figured out how to add interactive widgets, like tabbed and accordion panels, to the page.

As a content administrator, these had become her favorite go-to tools for building pages. They were brilliant, in fact! It had always irked Lila that the pages on their current site felt so cluttered. These new tools allowed Lila to tuck content neatly away. The pages now looked much more streamlined than before and were considerably easier on the eyes.

5:30pm. Lila was startled when she looked up at the clock on her screen and realized it was already the end of the day. Time was flying, but she was still only a third of the way through the list of assigned pages in her content migration spreadsheet. She had saved one of the biggest, most complex, content-rich pages for last. This one was a real beast: the content was a mix of dense copy, tables of data, price lists, and images. No matter how she tried to format the page, it seemed overwhelming.

6:02pm. Lila discovered a hack. It wasn’t what the designers or developers of their new site had intended—they had actually recommended that the content team resist the temptation to use accordions and tabbed panels—but she realized that if she flipped from WYSIWYG view to code view in the content editor, and then back again, a glitch occurred and a new button appeared in the content-editor toolbar. The button was black with a red icon that resembled a bird’s nest or an interwoven crown. It was pulsing. She quickly discovered that this button allowed her to do things the CMS was not meant to do. It gave her the freedom to build any type of page layout she imagined, by nesting columns inside of columns and rows in rows. Best of all, it gave her the power to nest widgets inside of widgets. Accordion panels inside of accordions. Tabs inside of accordions. Tables inside of accordions inside of tabbed panels. 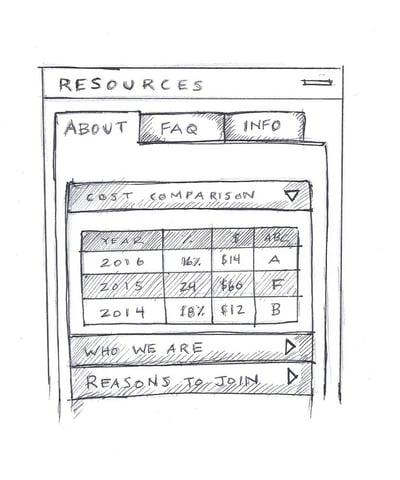 9:08am. When Lila awoke in her bedroom, her mind was foggy. She remembered working pretty late, but had no recollection of coming home, or what time she had left the office. She fumbled for the phone on her nightstand. 9:08. Shit. She had overslept and was late for work—totally unlike her. Lila was usually the first one in and last one to leave. She checked her work email, scrolling through her inbox. Mostly promotional crap.

Lila dragged herself out of bed, and stumbled over to her dresser. She had a screaming headache, the kind she’d normally only expect if she was recovering from a night out with friends and bourbon. She looked around, confused. Something was different. No. Everything was different. Her bedroom was immaculate. It was as if a cleaning crew had arrived in the night, organized her whole room, and left before she woke.

Still processing the scene, Lila made her way into the kitchen to put on some coffee. The counter was bare. Coffee pot: gone. Coffee grinder: gone. Dish rack, soap dispenser, knife block, toaster oven: gone, gone, gone, gone. Surprise gave way to confusion, and then slowly edged to fear. “I’ve been robbed?” She scanned the entirety of her 4th floor apartment. All the big stuff was still there: furniture, rugs, lighting. But all her stuff was missing. Artwork was missing from the wall. Books missing from their shelves. Candles gone. Knick knacks gone. In a surge of panic she turned toward her apartment door. The security chain still hung in place. She turned to the windows, closed with no sign of entry.

As her eyes darted around her apartment what struck her as most disturbing was how tidy it was. How perfectly uncluttered it all appeared. It reminded her of a staged apartment, beautifully furnished but devoid of any real sign of life. It felt empty. It was confusing and unnatural. Her anxiety increased. She felt cold and then hot, her insides feeling like they were swelling and pressing against her skin, trying to burst out. A knot twisted in the pit of her stomach, and she dashed back into the kitchen, looking for something—a knife, scissors—anything that she could find to protect herself in case whoever had done this was still in the apartment.

She yanked open the first kitchen drawer within reach…only to be paralyzed with fright when she saw what it held within. Inside the drawer was a smaller drawer. And with surmounting terror she knew, even before opening up that smaller drawer, what she would find within that one. Indeed, yet another drawer. In a frenzy, she tore open every cabinet door in the kitchen. Behind each door were more doors and more drawers. And cupboards within drawers within doors. An immaculate facade of a kitchen. An unending labyrinth of compartments within. 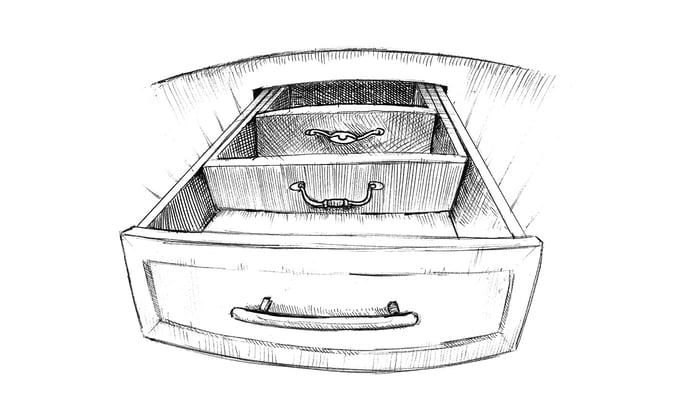 Lila ran through the rest of her apartment tearing open drawers and closets. It was the same everywhere. Shaking and out of breath, her apartment fully ransacked, she stood there wondering if she had gone mad.

Her phone buzzed, startling her from her temporary stupor. She had a new work email waiting. The subject line included just three words spelled out in red letters. It read, “content nesting complete.” Her skin turned pale. She ran to her apartment door desperately wrenching at the handle trying to get the door open. It was locked from the inside. She had never locked it from the inside before, it was an old door from half a century ago that required a special key for the inside lock. Her mind spun in circles as she tried to recall where it could be! As the realization of the key’s location dawned on her, the tenuous bit of sanity she still clung to flittered away.

2 years later. Lila never showed up for work ever again. To this day, no one knows what happened to her. On the day she went missing, neighbors reported hearing terrible shrieking and the sound of glass breaking. The apartment has long since been vacant, the windows boarded up to keep the neighborhood kids out. There are rumors that she may still be holed up, lost inside her own apartment. There are rumors there may still be a key, lost inside a drawer.

Email me when the next UX Tale of Terror is published:

UX Tale of Terror #2: Below the Fold