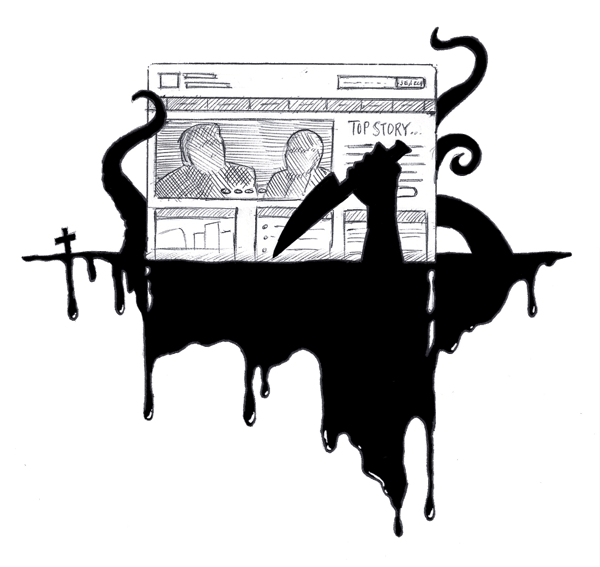 Who knows what hides below the fold?
Countless stories never told
or decaying corpses full of mold?
Tied up puppies, tightly bound
or missing persons never found?
Unsung memoirs new and old
are these what lurk beneath the fold?
—Old web legend

When Brad first got sentenced to below the fold he was appalled. It had really been a slap in the face. Brad was an important promotional content block on a prominent financial institution’s website. He had been there, in one form or another, for over six years.

The web team assured him that this wouldn’t be a bad thing. That perhaps it would work out for the best. The fold, they told him was not a real thing anymore. They went into great detail rationalizing their decisions, talking about what users needed and about content hierarchy. He could read between the lines, and no matter how they tried to frame it, their explanations rang with condescension. “Screw you!” he thought, while keeping silent. He had been “de-prioritized”, and he knew full well what that meant.

A year ago he had been above the fold, in a prime piece of web page real estate. He even did some time on the first slide in the carousel. Word on the street was that that was going away too. “Total bullshit,” he thought.

The first few weeks in the depths beneath the fold were rough. When Brad closed his eyes, he could feel chills ripple through his HTML. He pictured those hoity-toity modules up top bathing in the neon warmth of the heat maps. He wasn’t actually getting any more or less clicks than he had before, but it didn’t matter. They were in the limelight, and he wasn’t.

The days began to blur together. He had lost track of the pixels. 1200px, 1500px, 3000px—how far down the screen was he now? The chip on his shoulder grew, and under its weight so did his contempt for the other modules. Months had gone by, and after a series of layout adjustments, he found himself stuffed all the way at the bottom, right above the footer. This had been inevitable. He knew his days on the home page were limited, but this was an effective death sentence. Or was it?

The idea came to him during the pre-dawn solitude of routine server patching. He was probably the least important module on the page. Practically invisible. When was the last time he had gotten any clicks? It was a tall page. A lot of modules lived nice enough lives just below the fold. If he could just get to one of those zones, right below the fold, his plan could work. Web components all look similar enough…one to the next. And in the darkness beneath the fold, nobody pays much attention anyhow. Practically zero visibility. Even less governance. Deep down here, it’s every module for himself. If a module were to say, disappear, it’s doubtful anyone would even notice.

Brad found it curious to reminisce back to a time when even the thought of plotting to commit murder would have turned him sick. But now, he felt nothing. This was his only way out. His only way up.

He had decided that he would take out the first module, an RSS feed, by brute force. He’d choke the feed, until no more content came out. It would simply disappear, leaving a suitably sized hole in the page that he could float into. His plan worked. That got him close to the top. He could practically taste the fold now.

He knew he’d have to be especially discreet with the second murder. It was a political war zone above the fold, each component fighting to stake claim in the layout. Visibility was high—no sneaking your way in. You had to earn your spot. Things couldn’t look suspicious. He surveyed the layout and found his target: the Featured Article. He selected the poison: javascript injection. Yeah, that should do the trick. Just slip in enough bad code to blow up the UI a bit. That featured article module was as good as gone. Site administrators would yank it from the page immediately. Hope you enjoy the tail end of the Jira backlog, you pathetic sucker. A module sentenced to Jira might spend weeks, even months, in the backlog before seeing the light of the browser again.

Brad shivered and rolled to his side, reflecting upon his choices and what landed him here in the archive, slowly rotting away. Sentenced to life. He had been marked redundant. He was outdated and trivial. Brad hadn’t gotten away with murder; he actually never had a shot. Instead he got himself deprecated. You see, his plan had a fatal flaw. He had been participating in the consensual hallucination that screens and viewport sizes could be predicted. The web team had been right all along. There was no fold. It was illusory. He had committed his crimes in plain view of thousands of users. Scrolling, swiping, content-seeking users. His dastardly acts were witnessed across millions of different devices, screens and browsers. His assumptions about user-behavior had led to his demise.

Email me when the next UX Tale of Terror is published: